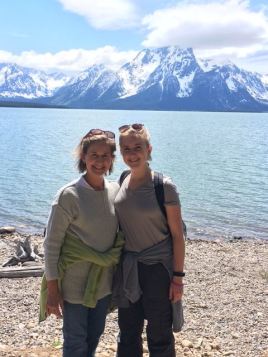 “Eight years ago Shaklee came into my life. I was standing in a hallway of our church waiting for my daughter to come out from her youth group meeting. I did not realize I was standing next to a bulletin board. Out of the corner of my eye I saw something flutter to the ground and of course I picked it up. It was a business card and the front said ‘Project MAHMA (Moms at Home Making a Difference)’ with the small lettering ‘Shaklee’. I had no idea who Shaklee was and the person’s name on the back I vaguely knew in our church. My daughter started running down the hall and said we have to go to the next stop so of course I went to put the card back. But strangely enough they were all pinned on the board so I threw it in my bag and off we went.

I forgot about the card (this was August) and then in October, I was cleaning out my pocketbook to pack away for the season and the card fell out. I had been teaching elementary classes K – 5th and had one of those horrid days with a really tough class. I looked at the card and was intrigued so I called my two sisters; one works with the #1 Children’s hospital in the U.S. and the other is partnered with the # 1 Travel agency in the U.S. and has her own business. (Little did I know then that I would be partnered with the #1 Natural Nutrition Company in the US). I asked them to research Shaklee and not a single red flag came up. So I met with the person who was on the card and she briefly told me about the company and what the investment would be to start my own business.  I then sat my three children down and told them I was considering starting my own business on the side and continuing to teach. My two boys said “Mom, it doesn’t matter what we say you are going to do what you want to do” and my daughter made me cry with her words of encouragement and support. I told my husband last as I knew he would not be keen about it and I was right. But that didn’t stop me. I signed up with a Gold pack and began my journey. I believe to this day there was a reason that card fell to the ground and I picked it up.

I grew up with a mother who was a nutrition major in college so we had a huge garden, fruit orchard, chickens, a horse, we composted, fished, and clamed. Meals were always home cooked; no cans, processed or fast food. I took it all for granted not realizing what an impact that would be on me years later as a mother of three and then having my Shaklee business. My mother would never put a chemical spray on our gardens but we had the household chemicals inside. I had no idea how lethal these cleaning products, beauty aids, and cosmetics were until Shaklee came into my life. Since I knew all about the outside, it was a no brainer I needed to clean up the house inside. I started with the Get Clean kit and water pitcher. I learned how detrimental those chemicals and plastic water bottles were to our health, especially with my children and having a daughter. You could say I came full circle from how I grew up to having Shaklee come into my life.

Though I wish I knew Shaklee years ago I feel it wasn’t my time. I needed to experience teaching in our elementary schools to see the difference in the children from when my three were there, which wasn’t that long ago. The allergies, obesity, brain fog, and medications taken by our elementary age children is heart-wrenching and quite shocking. I continued to teach and do Shaklee part-time and two years later I became a Director. I had been sharing with anyone I could what I was learning about these great products and the health impact it would make on their lives and their families’ lives.

And then after teaching for ten years I decided I wanted to do Shaklee full time. We only have so much energy and time in a day and I wanted to focus on Shaklee and help make a difference in the lives of others.  That was four years ago and I have never been happier in what I do. Yes I have those ‘down’ days when I feel maybe I am not cut out to be my own boss. I don’t have a team, I have not gone beyond Director, and my family thinks I work too many hours for not enough pay and my friends don’t always ask about my business. But then I see the difference I am making in others’ lives, people I never knew that I shared the Shaklee story with and believed in me because of my passion and care. Their health improved, they had more energy, and special relationships began.

I used to think family was only my ‘blood’ but I soon learned what the Shaklee family is all about. If I have any questions I can reach out to the field for answers and not worry about them not being in my group. I have had several Gold Distributors sponsored throughout the years and was so excited to help them grow and develop but I guess I wanted it more than they did. It is okay because I know I am making a difference; the Ripple Effect. I might be the tortoise and not the hare but that’s alright. Because I know I am part of the Shaklee Effect; one person at a time, changing lives, and making an impact no matter how small it may seem to others.”

Hope embodies everything her name means. She also represents something so unique to Shaklee as a business over 60 years old in that she is 9 LEVELS DOWN in our Organization, with 4 Master Coordinators in between us. That’s quite a testament to the Ripple Effect! Consider the long history of her Shaklee lineage…

The Betty Farner Family, MCRD (joined in the 1960s)

The Janet Mooshagian Family, MCRD (joined in the 1960s)

The Yolande Cadieux Family, MCRD (joined in the 1970s)